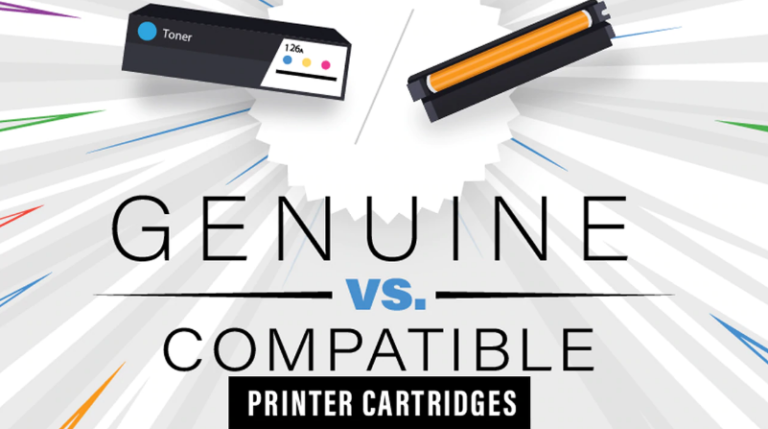 The differences between original and compatible ink cartridges.

There’s a lot of confusion out there around the differences between original and compatible ink cartridges. This article is here to help clear up some of those areas of confusion, and help guide your decision as you purchase cartridge for your printer.

In comparison, a ‘compatible cartridge’ is one that’s been manufactured by a third party company for use in your printer. It’s still a brand new cartridge and should work just as well as an original one. In fact, after several extensive independent studies, it’s generally agreed amongst the experts that the quality of printing is more or less the same between both types of cartridge.

So in fact, as you might have figured out by now, the biggest difference between original and compatible printer cartridges is the price. The simple truth is that companies that develop printers have a lot of overheads because of the extensive research and development involved in the manufacture of their products. Charging a lot for the ongoing costs of those printers once a customer has ‘bought into’ them is one way they can make a better profit. In comparison, a company that simply makes compatible cartridges has no such overheads, and can therefore afford to charge much less.

So if compatible cartridges offer the same quality outcome for much less money, why does anyone still buy ‘original’ cartridges? The answer may surprise you: it all comes down to the widely held belief that third party cartridges can damage the printer they’re used in. In reality, the chances of this happening are slim and getting slimmer. That’s because, in an era when customer reviews are so widespread and so trusted, there’s simply no way a company can survive selling dodgy products. Of course, if you find ink cartridges for sale at a ridiculously low price you’d still do well to look elsewhere – it’s more a case of using your common sense than anything else.

Another quick point to bear in mind is that if your printer is a brand new model, you might well be forced to buy original cartridges for a few months until the market for compatibles develops. This is particularly relevant with refilled cartridges, which obviously rely on a supply of used original cartridges before they can be produced.

In fact, so reliable are the vast majority of compatible cartridges that using them won’t affect your printer warranty. That means, for printers still within their required one year warranty, if your machine breaks and you were using a compatible cartridge, you’d have just as much right to technical assistance and even a replacement printer as someone who only ever used original cartridges. If the fault is found to be the result of a third party cartridge (which it almost certainly won’t; there are actually very few ways for a cartridge to harm a machine), then you’ll be covered by the guarantee from that cartridge supplier.

8 thoughts on “The differences between original and compatible ink cartridges”